Angthong International Meditation Center is a branch of Pa Auk Tawya International Forest Monastery in Myanmar.  The meditation center is being supported and organized by On the Path of The Buddha Foundation which is founded by Mrs. Kingkarn Arakputhanan, president of the foundation.

The foundation and then the meditation center flourished from a small dhamma club “Wednesday Dhamma Studying Club” then Pa Auk Vipassana Dhura (Thailand), with the intentions to support samatha and vipassana in accordance with the steps in Visuddhimagga, under the guidance by Pa Auk Tawya Sayadaw U Acina.

Before then, the Wednesday Dhamma Studying Club had the opportunity to cooperate with the Bangkok Sangha to occasionally organized the expositions Asarahapucha Dhammayata Protect the World, for 7 years consecutively.

On another occasion of Visakpuja year 2015, the club was offered another opportunity to organize the exposition for Visak Puja, at Bhutthamonthon.  The event was initiated by Somdej Phra Phuttha Chinwong (Somsak Upasamo), a most respected mahathera.

After over 20 years on the path of Buddha’s dhamma, during which the club offered class study on Abhidhamma, Tipitaka, Visuddhimagga, with constant involvement in conferring dhamma benefits to the public.  These ongoing activities greatly gave rise to the inspiration in setting up “ Angthong International Meditation Center ”  The founder wishes to serve Buddha’s dhamma for the longest period as possible.  A foundation is therefore set up to support the meditation center financially.

The initial inspiration arose when venerable Mahadhammarakkhita gave the news to Mr. Kingkarn Arux… that a Myanmar forest monastery accommodated over 1,000 meditators of Bhikkhus, Sayalays and laypersons, practicing samatha and vipassana under the guidance of the abbot Pa Auk Sayadaw by following the procedure as described in Visuddhimagga.

In January 2012, Thai Sangha and lay persons visited Pa Auk Tawya Monastery in Mawlamyline.   The observer group was led by The most venerable mahathera the late abbot of Wat jakdaeng monastery Prakru Dhammathorn Sumon Nundhiko Akkamahapandhita bestowed by the Myanmar government in March 2008.

Year ending 2012, another visit to Myanmar by Venerable Mahadhammarakkhita (Maha Payom) leading sangha and lay persons to pay homage to the abbot of Pa Auk Sayadaw for the 1st time at Tuan Tuan Oo dwelling in Yangon.  At the time, Khun Kingkarn expressed her intention to set up a meditation centre in Thailand and thus invited the most respected Pa Auk Tawya Sayadaw to inspect 2 chosen locations, one of which was at a forest park at Udornthani Province.

In April 2013, Pa Auk Tawya Sayadaw came by invitation to inspect both sites.  The Ang Thong location was chosen because of its plentiful supply of water.

Since 2013 Angthong International Meditation Centre was established with the aim to support the inheritance of The Buddha’s genuine teaching both on pariyatti and patipati.

For pariyatti, the classes here cover Abhidhamma, Sutta in Tipitaka, Visuddhimagga, Pali in comprehensive and Vinaya as on occasions.  They are conducted in Thais.

For patipati, the great treatise ancient Visuddhimagga “Path to Purification” complied in the 5th century and was the teaching in the Mahavihara school of Theravada Buddhism, is the path to be practiced by meditators here.   The most respected Pa Auk Tawya Saydaw mastered by his own experiences meditating in accordance with the steps described in Visuddhimagga.

Subsequently, during 2015 to 2017 Pa Auk Sayadaw delegated Sayadaw U Revata by invitation to stay and teach in Angthong International Meditation Centre. 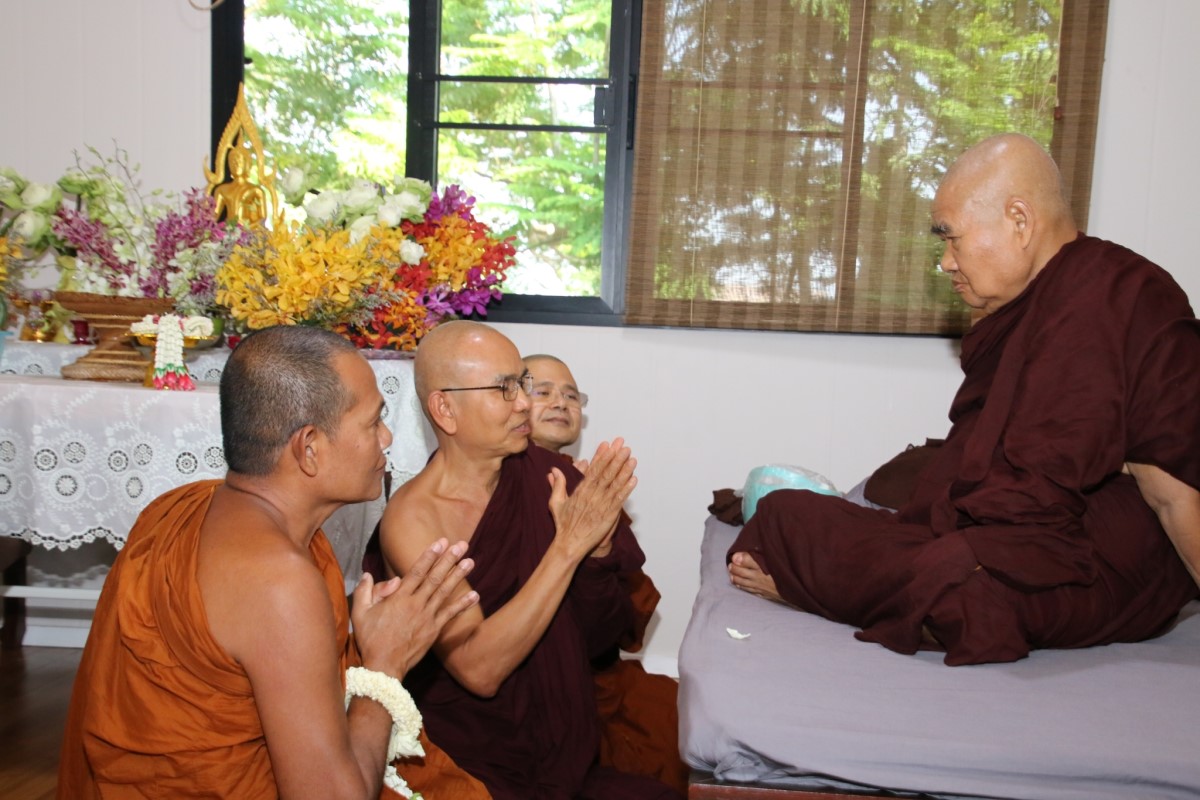 Throughout the year, courses are arranged on pariyatti for Thais and Meditation Retreat is organized for international meditators.

Angthong International Meditation Centre established and run with full support from On the Path of the Buddha Foundation.