What is taught and practised in Pa-Auk.

The system of meditation taught at Pa-Auk Tawya is based on the instructions by The Buddha as found in the Tipiṭaka (the Pāli Canon) and its commentaries. The system comprises the threefold training of strict observance of precepts (sīla), developing concentration(samādhi), as a basis for attaining wisdom (paññā). This is further subdivided into the seven stages of purification which provide a step-by-step formula for systematically purifying one’s body (physical actions), speech and mind of defilements in order to realize Nibbāna in this lifetime. 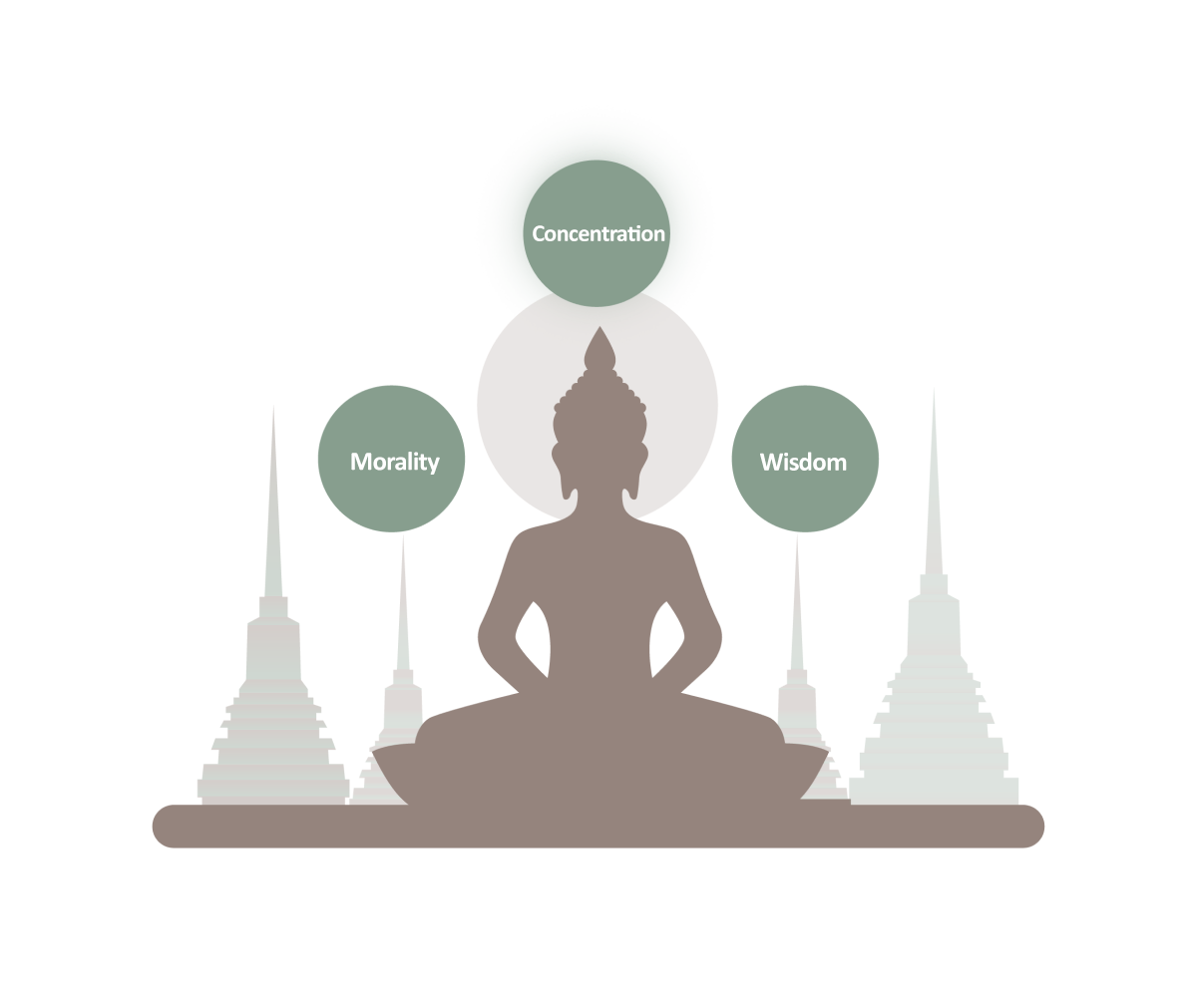 In brief, the main practice is to begin with Samatha (tranquility) meditation, which is to develop absorption concentration, also called jhāna. A yogi (meditator) is free to choose any of the forty Samatha subjects as taught by The Buddha. In Pa-Auk Tawya, most yogis develop jhāna with mindfulness-of-breathing (ānāpānassati). Having developed Samatha, the yogi may proceed to practise Vipassanā (insight) meditation.

As an alternative, the yogi may omit the development of jhāna. He/she (“he”) will be taught instead to develop the less powerful access concentration with the Samatha subject of Four-Elements meditation, prior to the practice of Vipassanā meditation. In either case, the concentration attained by the yogi produces the ‘light of wisdom’.

Having completed the development of his/her (“his”) Samatha meditation, the yogi is then taught to protect his practice with the Four Protective Meditations of Mettā (Loving Kindness), Buddhānussati (Recollection of The Buddha), Asubha (Repulsiveness of the Body), and Maranānussati(Recollection of Death).

Following that, the yogi will be taught to prepare the way for Vipassanā meditation, which is to use the ‘light of wisdom’ to discern ultimate materiality and mentality. The yogi will also be taught to discern the workings of Dependent Origination (paṭṭiccasamuppāda). This means he will discern a number of past and future lives, and to discern the causes for certain rebirths.

Only upon having discerned ultimate materiality and mentality and their causes (Dependent Origination), does the yogi have the necessary objects for Vipassanā meditation. The practice of Vipassanā meditation is to discern the three characteristics of impermanence (anicca), suffering (dukkha), and non-self (anatta) in ultimate materiality and mentality – of past, present, and future, internal and external, gross and subtle, inferior and superior, far and near.

In accordance with the Visuddhimagga (Path of Purification), the yogi will be taught a series of detailed practices by which to develop and strengthen his Vipassanā knowledge of materiality and mentality of past, present and future. In this way, the yogi may progress through the different insight knowledges , preliminary to the attainment of Nibbāna.

Should the yogi attain Nibbāna, he will be taught how to discern which defilements have been destroyed, and which stage of enlightenment he has reached. With continued practice, the yogi may destroy all the taints, and be able to attain Arahantship, meaning he will have put a complete end to rebirth and suffering. 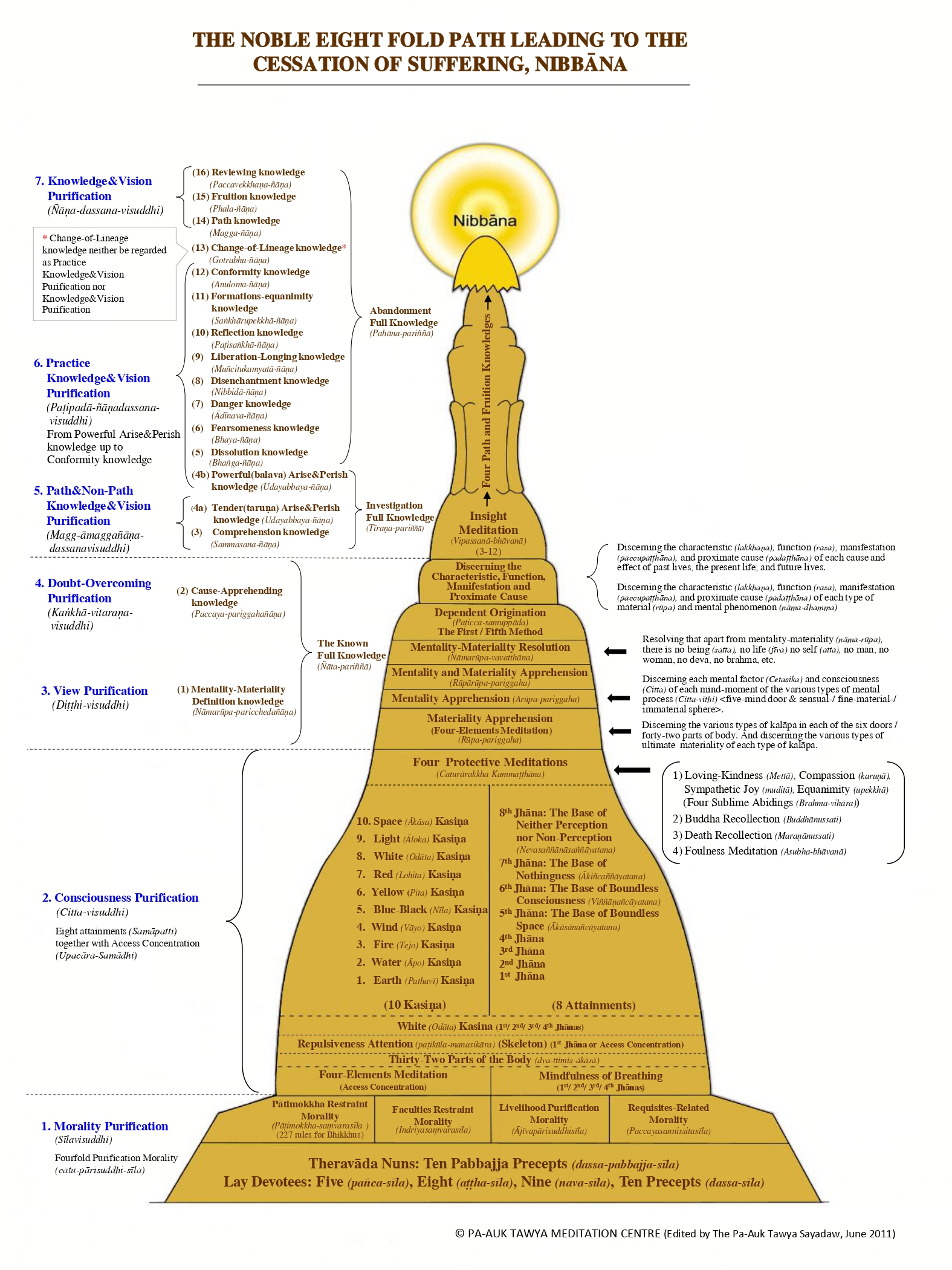 The 2 main languages of instruction for foreigners are English and Chinese.

For further details of the teaching of meditation, please refer to the book Knowing and Seeing (Fourth Revised Edition), by the Venerable Pa-Auk Tawya Sayadaw, and to Teaching & Training, a concise introduction to the Sayadaw’s teaching, compiled by his foreign disciple.